Skip to content
You are here:Home » Notices » Bow Arts launches the East London Art Prize
This notice appears to have expired and may be removed soon.
Polly Nash

Armed with an invitation to the launch of the East London Art Prize, our editorial team of two at Roman Road LDN ventured around the corner to Bow Arts’ Nunnery Gallery, its unmissable fuchsia parasols shining brightly in the sunshine.

With Rita the office dachshund in tow, little were we to know that the launch would include a sit-down lunch, white tablecloths and all. Luckily for Rita, the Nunnery Gallery welcomes everyone through their doors, our four-legged friend becoming a last-minute plus one to her first lunch party (and art launch!).

Featuring a feast of Indian inspired dishes, the lunch was catered by Cyrus Todiwala, chef-proprietor of Café Spice Namasté in the Royal Albert Wharf. From Bombay Masala omelette sandwiches to pumpkin cheese and pineapple pie, Todiwala’s treats were an art of their own, and well received by this collective of creatives.

Tucking into Todiwala’s bite-size treats around the table was an impressive roster of East London’s most innovative artists and generous supporters, including the judges on this year’s panel.

Chairing the panel is Bow Arts’ director, Sophie Hill, who announced the official opening of the East London Art Prize designed to showcase local artists. The prize accepts artwork of all media types and is accepting applications until 31 August.

So for all you artists interested in applying, these are the names you must remember. In-between you and that  £15,000 prize stands art critic Louisa Buck, Ellie Pennick of Guts Gallery, director of The Line Megan Piper and artist Larry Achiampong.

But what will it take for the esteemed judges to be impressed?

Before you rush off to your easels, kilns and turntables, here are a few more details about the competition you should know…

All media types are accepted, including (but not limited to!) painting, print, drawing, sculpture, digital, film, audio, ceramics, textiles and performance.

Artist collectives and joint submissions are all accepted, and submitting artists should hold an arts degree or qualification, or be able to show demonstrable commitment to their practice

And now for the exciting part …

First prize is a £15,000 cash prize and a solo exhibition at the Nunnery Gallery. The exhibition will be developed with Director Sophie Hill and take place a year after the winner’s announcement.

Second prize is a year’s free studio space at one of Bow Arts’ studio sites.

But if you miss out on the top two spots, don’t be disheartened. The prize takes place every other year, and presents two exhibitions across this time. Before the winner’s exhibition, a shortlist exhibition follows the Open Call, from which the winners will be announced.

So, what are you waiting for? Find out more and apply at Bowarts.org. 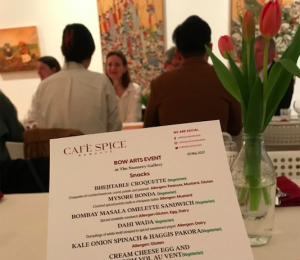