Skip to content
You are here:Home » Notices » Reader Letter: why Skew Bridge on Old Ford should be permanently closed to motor traffic
Citizen Journalist

In an open call to the community, local resident Ben Priestley argues that Skew Bridge on Old Ford Road, which has been temporarily closed to traffic during Covid-19, should permanently remain that way.

Something big has happened on Old Ford Road. One day during the Covid-19 lockdown council workers turned up and closed Skew Bridge, which carries Old Ford Road over the Hertford Union Canal,  to cars, vans, lorries and motorbikes. Big wooden planters were manoeuvred into place blocking the road on either side of the bridge to all but pedestrians and cyclists. The planters were filled with earth, and trees planted in each one.

The day before, Old Ford Road was a fume filled, noisy, commuter rat run for traffic coming in and out of town from Essex and Kent via the A12. Suddenly it became a safe and inviting route for local residents to walk to Victoria Park and cycle east or west in preference to taking public transport. The change was profound and miraculous.

There was a very good reason for the council to close Skew Bridge; it is very narrow.  The pavements on either side are small. Social distancing for pedestrians was totally impossible. Put simply, Covid-19 had turned Skew Bridge into a public health hazard.

Many would argue that the bridge has actually been a risk to local residents and commuters for many years. It sits over a pinch point in the canal and the restricted nature of the site means that it has been impossible to widen the bridge to accommodate the ever-growing size and ever faster speed of motor vehicles. To the east and west of the bridge, straight sections of Old Ford Road encourage drivers to exceed the borough’s oft-flouted 20mph limit. 74% of westbound vehicles were observed to have been breaking this speed limit, according to a freedom of information request made in 2019. Cars, lorries and vans approach the bridge at often reckless speed. There have been many collisions.

By closing Skew Bridge to traffic, the council has taken a bold step to protect us from the risk of Covid-19. Shutting the bridge has also reduced commuter traffic on Old Ford Road to a tiny proportion of what it was pre-lockdown. Air pollution and road noise have been dramatically reduced.

Like other Covid-19 measures, closing Skew Bridge has shown us that a different world is possible after the pandemic is over. Commuter traffic from Essex and Kent has found other routes in and out of town, and more local people have discovered that cycling and walking around London are both possible and enjoyable.

Closing Skew Bridge to traffic is one of the proposals which was set out in the council’s Liveable Streets plans for Bow published last year.

A summary report for local community workshops in Bow run by the Liveable Streets team last November and December said:

‘A closure on Old Ford Road at the narrow bridge was widely supported and it was acknowledged a safety issue is present on this road. There is strong support for also reducing traffic volumes on this road and creating an alternative east-west cycle route to the park and the canal path.’

Closing Skew Bridge is a temporary measure for the duration of the Covid-19 crisis. Before the bridge can be permanently closed there will be a public consultation.

But in the meantime, if you like the new Old Ford Road I urge you to email your local councillors, or Tower Hamlets Mayor John Biggs (addresses below), to tell them that you support the permanent closure of Skew Bridge to vehicular traffic.

And when consultations open on the permanent closure, hopefully in the not too distant future, do make sure that you take part and have your say. A greener, safer Bow is possible. We just have to say that we want it. 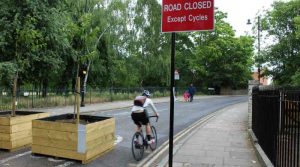