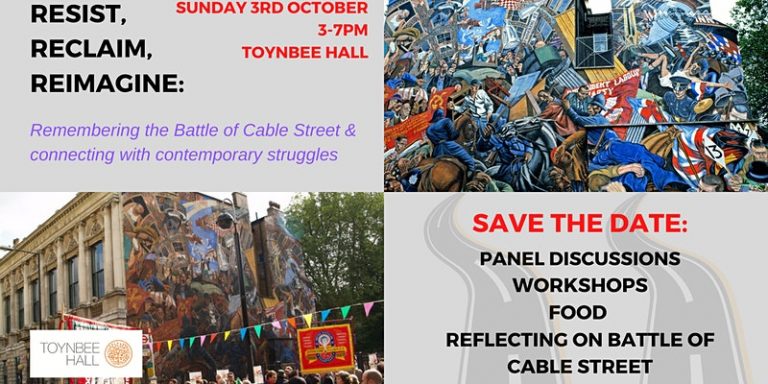 In an era of rising fascism and anti-Semitism in the UK, on the 4th October 1936, Oswald Mosely and his fascist party, planned to march through the East End, targeting the Jewish community. Despite public outcry and a petition submitted to parliament to stop the march, it was allowed to go ahead.

In protest, around 300,000 people including local Jewish communities and their neighbours, Irish Dockers, Trade Unionists and Communists across the East End and London came together to challenge Oswald Mosely from marching across Cable street, galvanised by the slogan No Pasarán! (They Shall not pass).

Toynbee Hall celebrates the 85th anniversary of this historic moment of community protest and solidarity. Join them on Sunday afternoon where they will have archival material documenting the event, panel discussions and workshops that reflect on the Battle of Cable Street and what it means for the current struggles communities face. Get a chance to meet other people, share food and spend time at Toynbee’s historic halls.

If you have a personal family connection to the Battle of Cable Street and would like to share your story, we’d love to hear from you. Please contact farha.bi@toynbeehall.org.uk or call 07398 294110