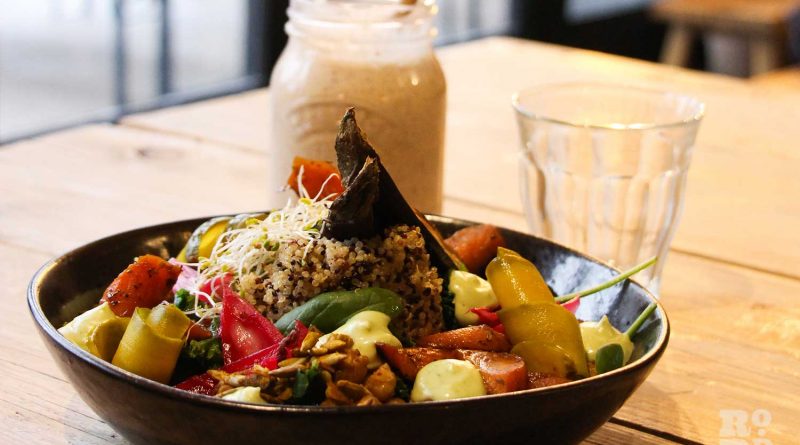 Vegan food reviewer Gem Stokes, along with her partner and photographer Kata, visit MȮTHER, a plant-based cafe that wants to help people develop a healthier relationship with their planet.

A short trek around a dystopian-style industrial estate near Elizabeth Park led us to MȮTHER, nestled in Hackney’s Here East. Stepping inside out of the rain into a deep breath of foliage and friendliness felt just as familiar as stepping into my front room. Welcoming and cosy, the no-judgement MȮTHER is a haven for plant-lovers and has become a local favourite for its delectable daily changing menu and pledge to the planet. Cashless, thoughtful and economical.

Kata and I settled onto French bistro-type tables to begin our banquet. The bar was set exceptionally high in terms of first impressions: the aroma of good coffee and food, and a pooch-friendly atmosphere that saw numerous dog walkers visit the café. Kata sank the remainder of her creamy oat flat white which she described as  “like a comfortable chair”.

We began with roasted red pepper and tomato soup with sourdough (gluten-free). The aroma of spices filled the space immediately, confirmed in the piquant pepper flavour. There was a sharp aftertaste of perhaps Worcestershire sauce. The soup’s presentation was just as impressive: laid in a large clay bowl with an artful drizzle and paired with a crusty and aerated sourdough.

We were also given a vegan sausage roll for dipping:  a generous crispy portion that you’d never know was entirely plant-based. The pastry was a tad dry but would definitely be improved if it was heated.

Kata and I agree how taken we are by the calm, welcoming atmosphere of Mother amidst a mouthful of the peppery sausage ‘meat’ peppered with chestnuts. The pastry was a real competitor for the current wave of vegan sausage rolls (which remains unbeaten by Greggs).

Next came a rustic roasted veg and kale salad with quinoa, dill mayo and roasted chickpeas.

I am not exaggerating when I say: this is one of the best salads I’ve ever had. There was a cacophony of seasonal root veggies: roasted chunky carrots with parsley, spinach, kale, pumpkin seeds and nutty roasted chickpeas.

My mouth was especially happy when it encountered the pickled gherkin florets and the salty, melt-in-the-mouth aubergine. This impressive presentation, colour and flavour balance was topped with little green shoots and a creamy dill mayo.

Originally a stall in in Broadway Market, MȮTHER was founded by three siblings: Patrick, Chloe and Charlie. Their focus on organic and locally-sourced food is inspired by Chloe’s childhood illness that she believes was aided by changing her diet and listening to the instincts of her body.

MȮTHER is unique, even among the current trend of vegan cafes that have sprung up around the area, because their doctrine goes well beyond food.  In addition to healthy food, the cafe hosts ‘Wellness Wednesdays’, a series of talks about food and lifestyle, as well as occasional yoga classes.

They also address environmental issues by  implementing the ‘takeaway tax’. This offers customers a discount for bringing their own containers for takeaways, the small charge to use disposable containers donated to charity.

Promoting conscious eating without crossing into preachiness is a delicate line that MȮTHER  has mastered, in part by putting their principles into practice, often in unique and delightful ways.

They also make a point of being inclusive to non-vegans, despite being 100% plant-based, by not broadcasting ‘vegan’ in their branding. As owner Patrick explained, there’s too much pressure and demonization of veganism due to a select group of vegans that lambast anyone ‘not doing veganism properly’.

As Kata and I took a breather before dessert in order to not explode from our previous courses, we reflected on the restaurant’s ethos.

Now, more than ever with the threat of global warming, one of the best things non-vegans can do if they don’t want to commit going ‘full vegan’ is to limit animal products – have a vegan meal a couple times a week. Not only does this aid the planet, but your wallet, and health too – and MȮTHER is a great place to start.

And finally, our dessert arrived: a moist vegan brownie, unexpectedly bitter despite smelling like brown sugar. Sticky, fudgey and rich, topped with salty peanut butter and chopped nuts, this brownie was moreish, but unfortunately too much for us to finish.

We washed it all down by sharing a peanut butter booster: a protein-packed smoothie with banana, served in an aesthetically pleasing mason jar, with a bamboo straw.

At a time when more and more people feel compelled to consider their impact on the planet, MȮTHER is truly an eatery for today’s times.

From their embrace of ‘flexitarians’ to the ‘takeaway tax’ this is an inclusive vegan cafe that anticipates and meets our curiosity to live a life that is kinder to the planet, and serves up great tasting dishes.

Gem Stokes has 7 posts and counting. See all posts by Gem Stokes