As the photos testify, great fun was had by all at our celebration for the Queen’s 90th birthday at the Yard Market, Roman Road on Saturday 11th June.

As at all the best birthday parties, cake featured heavily. Cake to buy and eat made by local cafés and bakeries, fairy cakes to decorate and then eat and the most fabulous cakes to admire, brought to our Right Royal Bake Off contest by local homebakers. People showed off their baking prowess and enthusiasm by bringing an amazing array of inspired and creative cake creations ranging from a corgi and a castle to a crown and a teapot. The people voted for their favourites in our cake referendum and then our fantastic judges did their stuff and awarded prizes, but in all honesty they were all winners. Here are a few of the entries along with the winners of the People’s Cake Referendum: 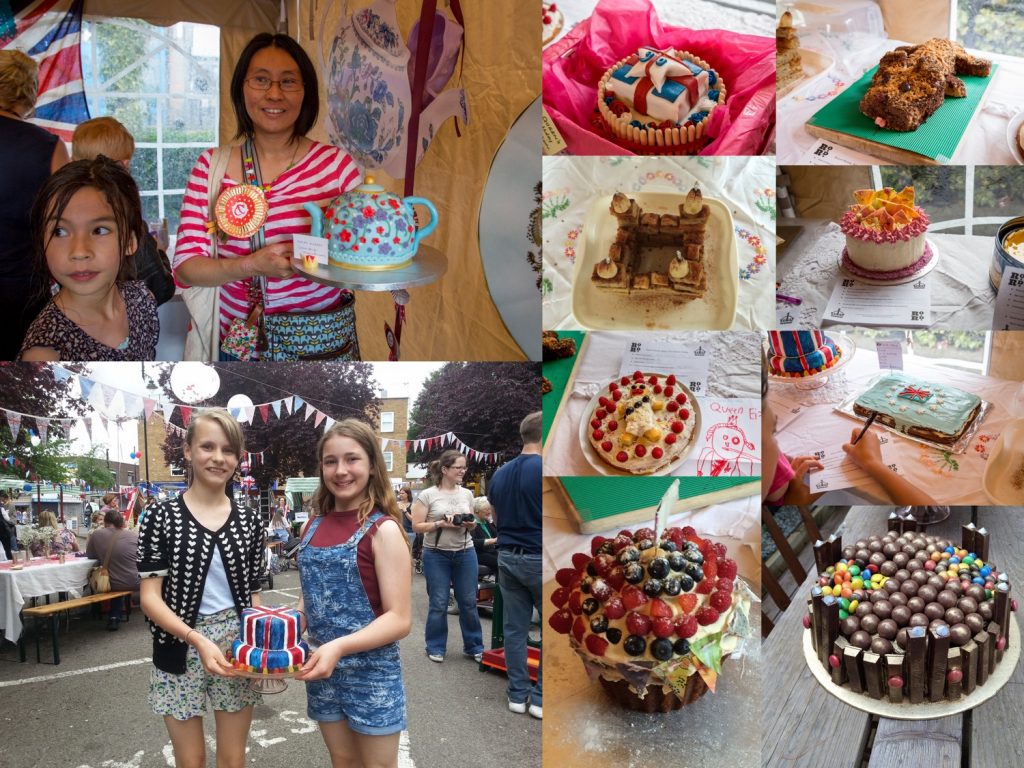 After the judging we auctioned off some of the cakes to raise more money for our good causes and on Monday we delivered the winning children’s cake to Bow Foodbank for their clients to enjoy with a cuppa.

Crowns were much in evidence too – made by children of all ages and worn with pride through out the day, along with medals from our ‘make a medal’ stall. The creativity was boundless, along with the glitter and glue! Partygoers also had the chance to be crowned King or Queen of Roman Road and declare what they would change on the Roman and how. All part of the creation of a Roman Road Neighbourhood Plan which will in time give local people the opportunity to influence planning and development on and around Roman Road. Please do find out more and sign up to add your voice. 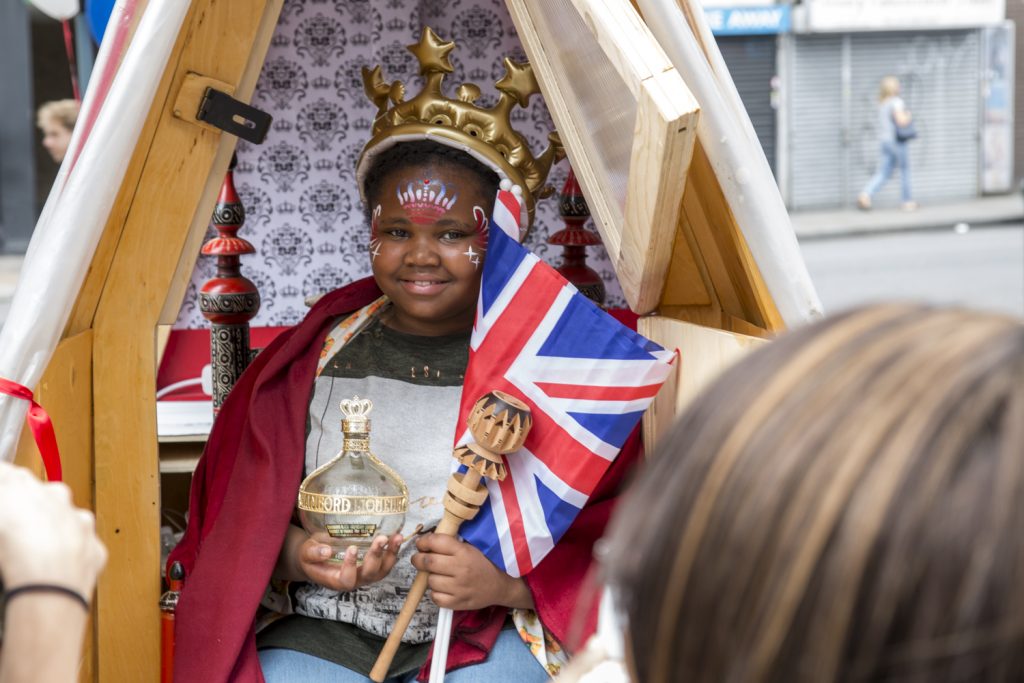 At the heart of the event was our communal tea table made for sharing and chat. Plates of dainty sandwiches and obligatory cups of tea and squash were made and served by the local Woodcraft Folk using ingredients kindly donated by Tesco. All profits from the sandwich and cake stalls and sales will be shared by Bow Foodbank, plus the Scouts and Woodcraft Folk kids who worked so hard on the day. They even served tea and sandwiches while standing in a few inches of water, courtesy of the Great British weather which gave us slightly more than we bargained for half way through the afternoon. Far from dampening spirits it increased resolve and created some unexpected play places. 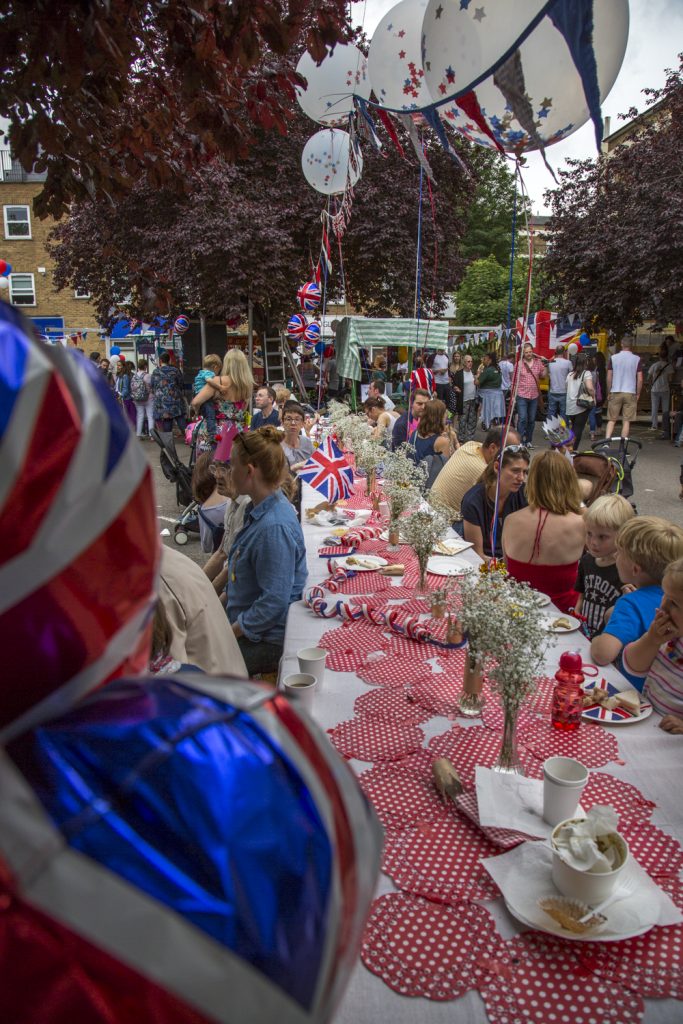 There was plenty to entertain through-out the day – Jo May taught us how to play the spoons, while Teavolution whizzed around the space like spinning teacups bringing fun and creative chaos with them. Our fantastic buskers strummed and crooned come rain or shine and there were opportunities to Splat the (Royal) Rat and Pin a red nose on the Queen. Our very own Suffragette reminded us about the rich and important heritage we have in Bow and drummed up support for our brand new Bow Suffragette Statue campaign.

The last word has to go to the knobbly knees contest which attracted local knees of all shapes, sizes and ages. After deliberating and cogitating our judges who included Tower Hamlets Mayor John Biggs, awarded prizes to the knobbliest in Bow, in men, women and children’s categories. The clouds parted and the sun shone on all those lovely knees.

It was indeed a right royal knees up. 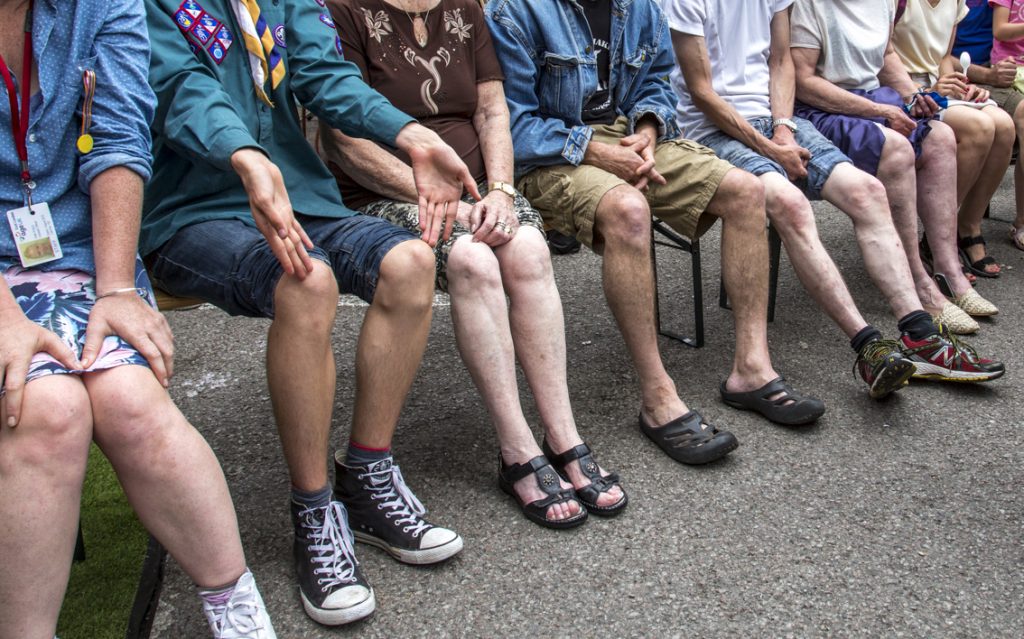 There are scores of people, businesses and organisations to thank for giving us their time, money, skills and important stuff, without which this event could not have been the true community event it was. Indeed it might not have been an event at all without their input, so here’s our very own Roman Road honours list. A big thank you to everyone listed here and anyone we’ve woefully forgotten:

A round of very loud applause to JB Riney & Co Ltd

Super troopers on and off the field

Cakes and Crowns was produced by Roman Road Trust CIC

2 thoughts on “Queen’s Birthday Tea – a grand day out! [PHOTOS]”