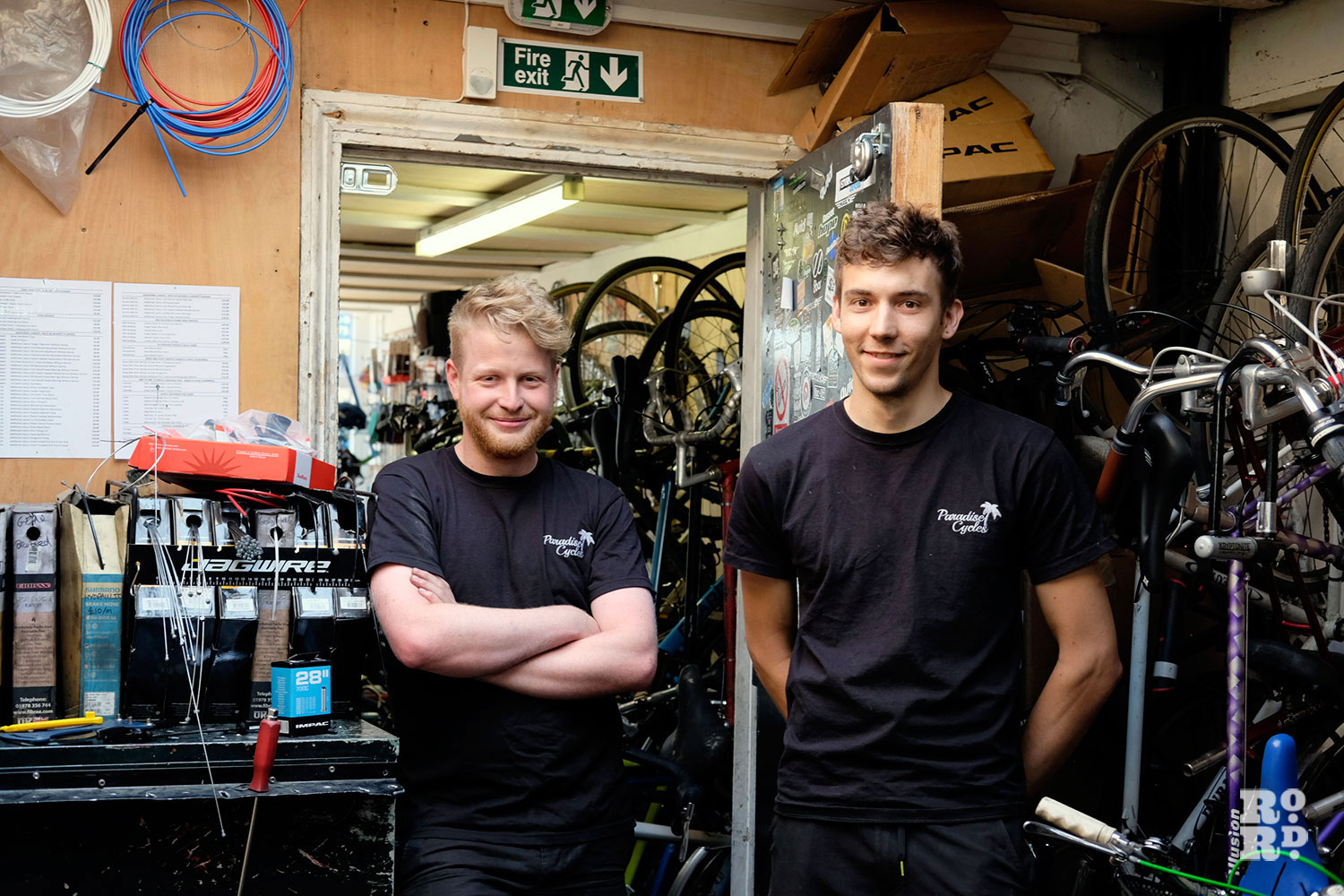 The owners of Paradise Cycles, Louis Wigston and James Johnson, have a soft spot for commuting. Not only do they find it meditative (‘there’s so much you have to concentrate on when you’re cycling through London that you can’t think about the stress of work’), but the tidal commute also brings in their customers.

‘It’s critical that we’re on an east-west road,’ Wigston says, ‘it means we have so many cyclists riding past in the morning.’ When they founded the company nine years ago, there were no bicycle mechanics between Bethnal Green and Stratford. Today there is a constant stream of customers through the door of their Roman Road workshop.

Paradise Cycles is a community workshop, based where people live rather than where they work. ‘We wanted to give something that was more friendly and less corporate,’ continues Wigston, ‘that was the niche.’

But it’s more than just geography that has made Paradise Cycles such a success. We spoke to them about their loyal customers, being non-judgemental and having trusted hands.

The birth of Paradise Cycles

The friends met when they were both students at Queen Mary University, fixing bikes in the workshop of their student house (on Paradise Row, hence the name). After winning two enterprise awards from university in 2009, they invested in tools and launched pop-up workshops on campus and in Victoria Park. They drummed up demand from customers and gathered financial investment from friends, until October 2015, when they took a space on Roman Road, Globe Town.

‘We were earning money by working in the Morgan Arms up until the month before we opened the shop,’ says Johnson. ‘In the first year we didn’t pay ourselves at all – we put all our money into growing stock and tools.’ ‘And we worked the first 35 days straight,’ adds Wigston.

Slowly Wigston and Johnson paid their investors back, employed four full-time employees and rented the whole building, which is now part flats and part workshops. ‘We’re in an incredibly privileged position that we own the whole business between the two of us,’ says Wigston, ‘which is absolutely fantastic. And that’s because we could take our time and grow it organically.’

But the friends are being modest. They are cycling junkies (owning 16 bikes between them), cheery conversationalists, gear-change experts and, crucially, honest. ‘We give a lot of impartial advice,’ James says, in between giving his customers impartial advice. ‘Which means we lose money or don’t get a sale, but which also means we get that customer’s respect and loyalty.’

It is their aim to explain to their customers exactly what is wrong, what to buy, and how to fix it. ‘We try and be as non judgmental as possible,’ Wigston says. ‘That’s a massive faux par with cycling shops being condescending with people. Stereotypically there’s a masculine, “we know better than you” vibe. We try not to discriminate.’

The people who work at Paradise Cycles wheel bikes through the tiny shop with ease and untangle greasy chains with glee. One of their local apprentices, Jake, has been with them since he was 16. Jake now has a mechanics qualification under his tool belt and is off to be a stunt rider for Nike.

Despite customers’ bikes fighting for space in the shop over the summer months, the winter is much quieter. Fairweather cyclists use the tube, leaving Wigston and Johnson spare time to run bike-fixing tutorials.

‘Mechanics can be grumpy and dislike explaining things in layman’s terms,’ says Johnson. ‘That puts people off and causes them to go on the internet and buy the tools to fix their bikes themselves. We’re trying to bridge that gap by educating people about what they can do and when they might need to bring it in.’

High street rents are too high to expand to another shop, but there is talk of renting a warehouse with more fixing space. ‘Ideally we’d have a high street location that people know and then an industrial place nearby that’s more appropriately designed,’ Wigston says. ‘But we love this place – it’s got its charms, none of the f**king walls are flat, the ceilings are different heights, it’s great, it’s ridiculous, every single edge is different.’ (It is.)

‘And it’s critical that we’re on the high street, we would have gone bust a year ago if it wasn’t so prominently placed.’

The friends have lived in the area for over ten years and are passionate about it. ‘I think it’s important to have a holistic high street. I think that diversity of people and businesses is key,’ Wigston says. ‘Making it nicer for people who live here now is completely different to making it nice so people come in and buy houses. That’s something that’s really important to me.’

Wigston and Johnson have become essential parts of the Roman Road tapestry. They offer honest, hands-dirty advice, instead of bearded bike therapy with a side of flat white.

If you liked this, why not try reading about Wigston and Johnson’s old friend and owner of Cafe East, Mustafa Has.

3 thoughts on “Paradise Cycles: The bike shop born and raised on the Roman”