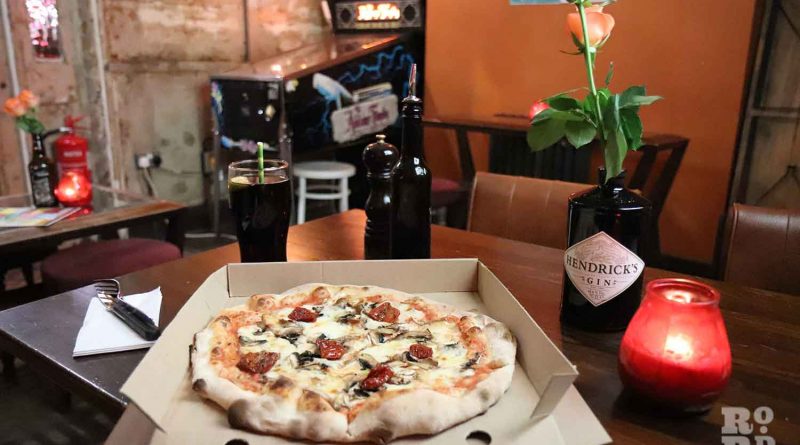 Don’t let the name fool you. This authentic Italian gem can be found on the market side of Roman Road, though the first branch was indeed opened in Brixton. Upon entering their no-fuss, spacious restaurant, you are immediately greeted by cheery staff and smiling chefs, who really know their dough.

Manager Giada Penisola explains that their vegan pizza is the most popular. It consists of tomato, chestnut and porcini mushrooms, artichokes, Leccine olives, oregano and basil. Usually though, ‘people add whatever cheese they want to it’. This restaurant prides itself on choice, allowing customers to choose a range of cheeses, to create a custom combination which speaks to them. They also have a daily special.

Pizza Brixton’s most unusual option is Pancetta e spinaci (that’s bacon and spinach). Unlike traditional pizzas that have a tomato sauce, this one has a ricotta base – covering the dough in a creamy, salty sauce that pairs nicely with the soft spinach and bacon pieces.

Pizza Brixton is on Deliveroo.

Stepping into The Pizza Room feels like going back in time, like walking into an Italian kitchen set among rolling Tuscan hills.

Looking onto Mile End Park, this friendly establishment is a local favourite amongst Queen Mary University Students, who take advantage of their affordable lunchtime deal.

Managing Director Pam Tironi walks through their extensive dough making process, which involves making a ‘biga’, which helps the yeast to ferment, and leaving this to rest for 24 hours. The whole process takes about 72 hours, meaning that the pizza is easier to digest.

Their most popular dish is the Vegan Veggie with perfectly cooked courgettes and expertly chopped, rainbow coloured vegetables. Cheese lovers have no fear, you can add mozzarella or vegan mozzarella as well. Tironi’s main focus is making pizza that the community will like and be able to eat.

The Pizza Room delivers via Deliveroo, Just Eat and UberEats.

Tucked away on Roman Road next to well-known cafes Mae + Harvey and Cafe East, is Vicolo Romano. Its exposed brick wall, hanging pots of lavender and matte-black pendant lamps give the space an industrial yet cosy feel.

Pictured here is their Green Pizza which is topped with broccoli, spinach, courgette, chives and buffalo mozzarella. Surely that’s at least two of your five-a-day on a pizza?

The dough is pillow-soft yet crispy on the outside. Manager Sandra Finez Gomez explains that they use semolina to give a slight crunch to the crust, as well as using organic flour and letting their dough rest for two days.

Her favourite? ‘The margarita as you can really appreciate the flavour of the dough, tomato sauce and cheese; nothing else is needed. The customer fave is probably our Meat Feast but all of our pizzas can be made vegan.’

Lord Morpeth may be known for being next door to the suffragette headquarters – marked by the portrait of Sylvia Pankhurst and the Suffragettes on its wall. But they also serve up sourdough pizza in their cosy, exposed-brick pub.

It is classic thin, sourdough pizza – with an airy, puffy crust and thin base. Their most popular dish  is the Diavola, a very spicy pizza thanks to the addition of salami made with picante chillies, as well as other types of chillies scattered on top.

For the non-meat eaters among you, the Rustica is a popular option with sun-dried tomatoes, black olives and other veggies. Vegans are also catered for, with their Super Vegano pizza  that comes with smoked chickpeas and aubergine. They do have a gluten free base but as all pizzas are cooked in the same kitchen it is not suitable for those with severe allergies or intolerances.

Lord Morpeth is on UberEats and Deliveroo.

The Florist is a cosy pub popular with locals just off the western end of Roman Road on Globe Road. They offer stonebaked pizzas with a homemade passata sauce.

Options include classics such as Margherita and Fiorentina (spinach and an egg), to more decadent specials that come and go on the menu such as a truffle pizza. Sadly, that option is no longer there but keep an eye out for their ever-changing specials.

Their best-selling pizza is the vegetarian Arrosto, which involves a healthy mixture of aubergine, courgette and peppers. The Sicilian Hot, with chorizo providing the fieriness, is also popular. Pair this with a cooling pint of East London Brewery Company bitter or ale.

At the moment, East London Liquor Company is not offering pizza on their restaurant menu.

Since opening in Bow Wharf in 2014, East London Liquor Company has gone from strength to strength, both in terms of its spirit and food offering. Starting as a gin distillery, it then expanded to whisky making and now doubles up as a delightful pizza restaurant.

The eatery is located in a separate building to the main bar but retains the same warehouse feel with its bare brick walls and Victorian architectural features. Their menu offers pizza and small plates, with dishes and toppings that change according to the seasons.

Dough is fermented for 48-72 hours to give it a good rise, and a shower of semolina ensures the crust carries a crispy crunch. There’s a vegan option that changes daily but is always marina-style, eschewing vegan cheese for a tasty tomato sauce.

Puddings include the usual suspects: Tiramisu, sorbet and fried dough strips. There’s no delivery service, but you can collect. This candlelit, cosy place with waiter service is a perfect option for date night.