Skip to content
You are here:Home » Inside the secret wildflower cottage garden bridging the gap between landlubbers and boaters 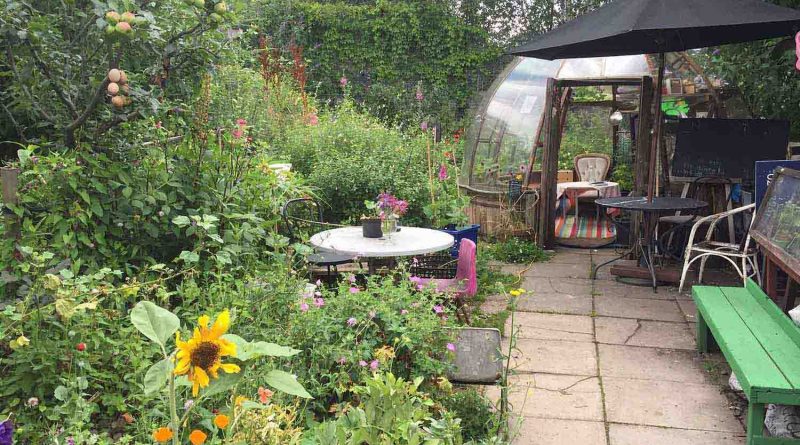 We explore the wildlife haven of bees and butterflies at Globe Town’s Canal Club Community Garden, cultivated by those who live on the waterways of East London.

Stepping among the apple and cherry trees interspersed with colourful wildflowers at the Canal Club Community Garden you’d be forgiven for believing you’d been transported to a rural cottage garden in the English countryside.

Little known outside Globe Town’s Wellington Estate, this fairytale spot complete with tattered floral bunting is adored by those lucky enough to have discovered it. With its slightly ramshackle, whimsical feel, this remarkable hideaway sits in stark contrast to manicured, bustling and hyperactive Victoria Park.

As we sit chatting to guardian of the garden Sally Hone, a man strolls in carrying a shoe-less baby strapped to his front and leans over the foliage so it tickles her bare feet. Hone points out a small bathtub, nestled among the greenery, full of vivid orange goldfish that gulp for air among the algae and it’s hard to refrain from poking fingers in to be nibbled.

But this charming garden isn’t just a pretty face. Volunteers work hard to grow vegetables including tomatoes, broad beans, rhubarb, gourds and cauliflower for residents, who are free to pick up what they need when it’s in season.

The garden takes its name from the now-empty Canal Club which it sits adjacent to – a somewhat misleading name since it is neither reserved for canal dwellers nor is it any kind of exclusive Club.

The garden was established by Sally Hone and other residents of the canals as a place to bridge the gap between boat dwellers and landlubbers. While life on the canals of London may seem a world apart from that spent in the estate, both communities deal with sometimes cramped spaces without access to a garden in which to sow seeds.

Craving the serenity of green space to cultivate and nurture, Hone and other boat dwellers took on the responsibility of this once derelict space in 2010 and have added to it year on year. Alongside local children, Hone and other volunteers have built a perspex dome from pallets donated from a printing shop, in which groups can gather safely from the elements. A mini greenhouse, the dome is warm and snug, allowing people to gather inside in a circle to breathe and relax.

An impressive clay pizza oven built by a former artist in residence can be fired up and loaded with kilos of dough to treat local families who are only asked to contribute what they can.

But above all, this is a space to appreciate nature. ‘This garden is a wildlife garden, we try to teach people about wildlife, bees and butterflies,’ Hone explains, and like magic, fellow boater Dominique Cournault appears with a bumblebee on his finger that he’s rescued from a hot patch of tarmac.

‘After ten years of not having sparrows here, we’ve got 20 pairs of birds nesting. We see them collecting the caterpillars,’ Hone explains, proudly gesturing to the bushes on the south side of the garden.

This is a space to be used by the local community for all kinds of events, from sewing workshops to remembrance gatherings, pizza parties to book clubs. An abundance of herbs and edible flowers perfectly indulges any inner-city Londoners cottage-core fantasies, with workshops on making cherry jam from the wild cherries that grow next to the canal, to apple pressing for making scrumpy, to elderflower foraging works to make sweet cordial.

However, the future of the garden is as murky as the water in the goldfish bath – which is on Hone’s to-do list to clean out – unless a kindly volunteer would like to have a go.

‘The lease is overdue by a year and it’s just not clear what’s going on. We need to know if the garden is safe,’ she says. Tower Hamlets Council has proposed the demolition of Canal Club – a plan reverently opposed and campaigned against by the community through the Save Our Space E2 campaign, but the fate of the conjoining Canal Club Community Garden seems unclear.

While Hone has received verbal reassurance from the Council that it will not be demolished, she is perplexed why then, the group’s licence to cultivate it hasn’t been renewed?

But for now, life goes on as always, with flowers to dead-head and seeds to sew. There are plans to plant more rhubarb and gourds – the particular species favoured by Bangladeshi families used in curries, though Hone forgets its name – and the broad beans need some tender loving care.

Budding and experienced gardeners are always welcome to volunteer, simply email at canalclubcommunitygarden@gmail.com with how you’d like to get involved.

Stop by the Canal Club Community Garden on Sundays and Tuesdays between 2-6pm, or Mondays between 4-7pm, to release your inner earth child, get some dirt under your fingernails, or simply smell the sweet scent of foxgloves.

If you enjoyed this, you might also like our interview with manager of Tower Hamlets Cemetery Park Ken Greenway. 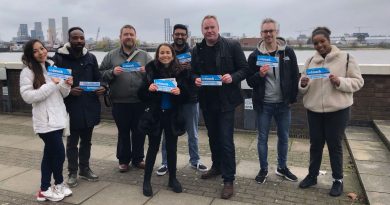