Skip to content
You are here:Home » The Eleanor Arms pub – Bow’s very own French Quarter 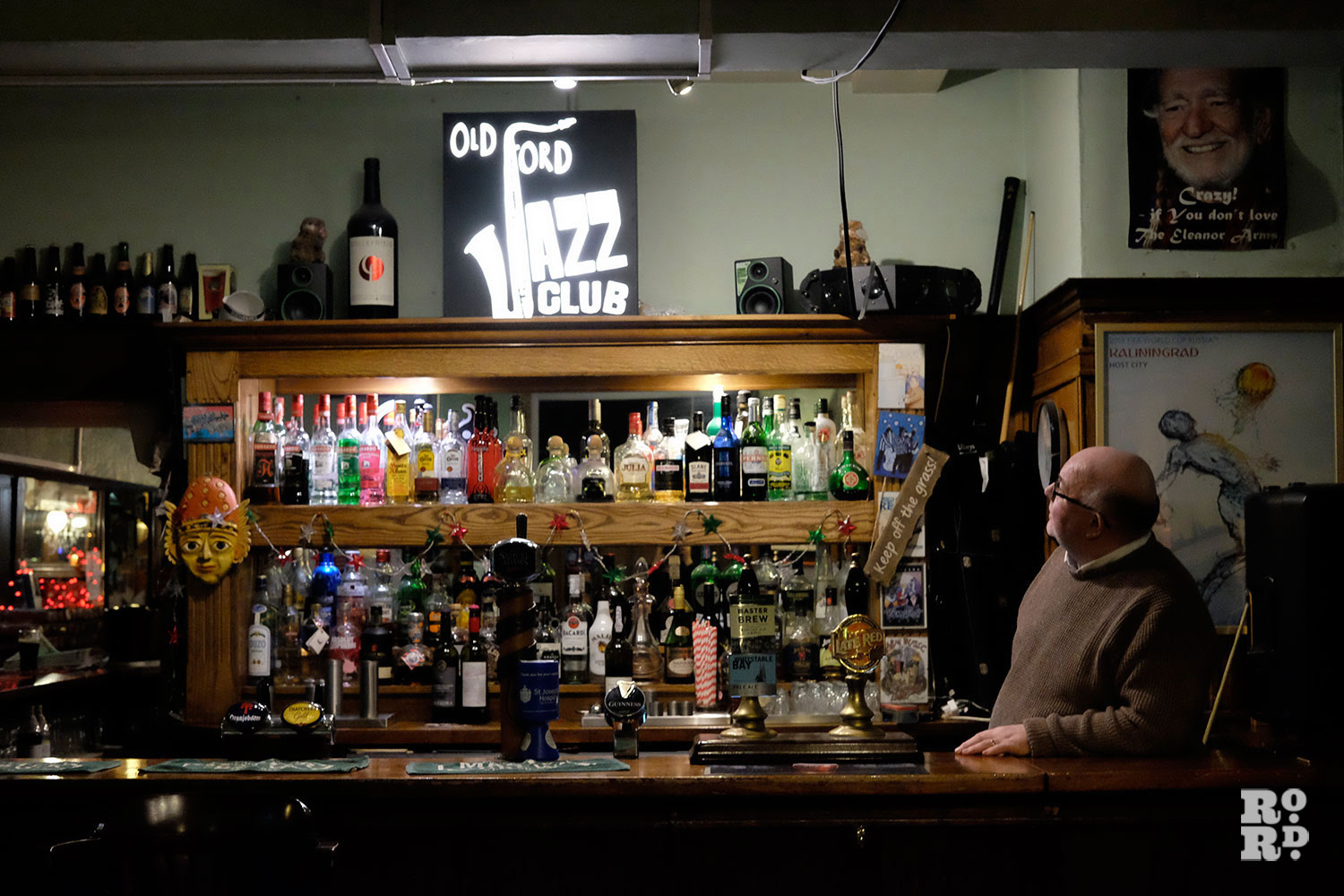 The Eleanor Arms has been selling beer on Old Ford Road for almost 150 years, but that’s not even the half of it, finds Frederick O’Brien.

The Eleanor Arms‘ last 11 under Frankie Colclough’s stewardship have been as busy as any. The pub has hosted Olympians, raised tens of thousands of pounds for charity, and served as the backdrop for 2015’s steamiest nude calendar. It has topped a slew of Best Pub rankings, including from the Society for the Preservation of Beers from the Wood in 2014. For good beer you’re in safe hands at The Eleanor Arms. And there’s much more to the place than good beer.

The Eleanor Arms’ cream and red exterior is assured and unassuming, especially in contrast with some of London’s swankier new pubs. Inside real ale is served from a dark wood bar, which sits between the pub’s two main spaces. On one side a jumble of tables and stools huddle round a redbrick fireplace; the other sagging leather sofas surround the pool table. Beyond that is the beer garden. It’s an open, convivial setup.

Frankie serves as landlord, DJ, and quizmaster at The Eleanor Arms. Quizzes are held on the first Thursday of every month, with the proceeds going to St. Joseph’s Hospice in Hackney. When Frankie and his wife, Lesley, bought the pub, a regular told them the previous owners used to have a donation jar on the bar and asked whether the tradition could be brought back. Frankie obliged, and fundraising for the hospice soon became a pub staple. They’ve raised money for Parkinson’s and Alzheimer’s research, London’s Air Ambulance, Whizz-Kidz, St Martin-in-the-Fields, amongst others.

The quizzes themselves are devilishly hard. Frankie writes the questions himself and makes no apologies for their difficulty. ‘If one person in ten gets it, then it’s a good question.’ Fibonacci numbers are on the cards this month (think 1, 1, 2, 3, 5, 8, 13, etc., but much, much worse), though it could all change with one burst of inspiration.

On Fridays and Saturdays Frankie acts as DJ for the ‘The Minestrone of Sound.’ Post-2010 music is off the table, but otherwise the range is enormous. Hundreds of CDs are piled behind the bar, a living monument to Frankie’s past working in record shops. Is today’s ‘vinyl revival’ legit? Frankie shakes his head. ‘We would have people lining up round the corner to buy a single. I don’t think today’s numbers would be anywhere near.’

The jewel in the pub’s crown is its jazz nights. Every Sunday at 8pm The Eleanor Arms transforms into the Old Ford Jazz Club. Frankie designed the sign himself. Performances blend into jam sessions and, against the odds, the acoustics are marvellous. A legit spot on London’s jazz circuit, The Eleanor Arms has grown into one of Bow’s prime live music venues.

The Eleanor Arms has travelled a long road to be what it is today. It has been selling beer on Old Ford Road since 1879. Indeed, its consistency has made its history slippery. The building has been ever-present. It’s the world around it that has changed. The pub was supposedly a Suffragettes haunt during their heyday, though it was never explained to Frankie who Eleanor was. He suspects she’s Eleanor of Castile, the first wife of Edward I, though why her arms are so important remains a mystery.

When Frankie arrived there was four tables, four pictures on the walls, and barstools welded together by someone who’d apparently had one too many. ‘They’d collapse as soon as you sat on them.’ Seven new lights were installed, and the fireplace was restored to working order. The furniture is now sturdy and the pub is homey.

The picture game is a far cry from what Frankie found. Now Roy Lichtenstein prints hang alongside record sleeves and Frederic Leighton’s painting Flaming June. A framed New Orleans poster bought in the city before Hurricane Katrina hangs by the pub’s entrance, a fitting backdrop to its jazz nights. The pub feels like a kindred spirit of New Orlean’s buzzing, kooky French Quarter. At the back there is a poster of the Wes Anderson film Isle of Dogs, signed by its animation team, who were regular frequenters to the pub while working on the film at 3 Mills Studios.

Brushes with Olympians and film stars make for good stories, but they also speak to the spirit of any pub worth its salt: a home away from home. Local groups like The Geezers meet there often, as do the St. Paul’s bible group. During the 2012 Olympic Games athletes would slip away from the bedlam of the Olympic Village for a quiet pint. The pub even has a reliable stream of Danish travellers keen to see London’s best pub.

East London’s influx of trendy bars with hipster patrons hasn’t gone unnoticed by Frankie, but he doesn’t expect to be ‘discovered’ anytime soon. ‘We’re not hip,’ he laughs. ‘The only hips round here are hip replacements.’ Besides, The Eleanor Arms is too far afield to be much good in a pub crawl. It is an island in more ways than one.

Whether you’ve come from round the corner or from the other side of the world, The Eleanor Arms offers a haven in which to think, talk, and play — and drink, of course.

If you liked this article, you might be interested in reading about the best pubs near Roman Road 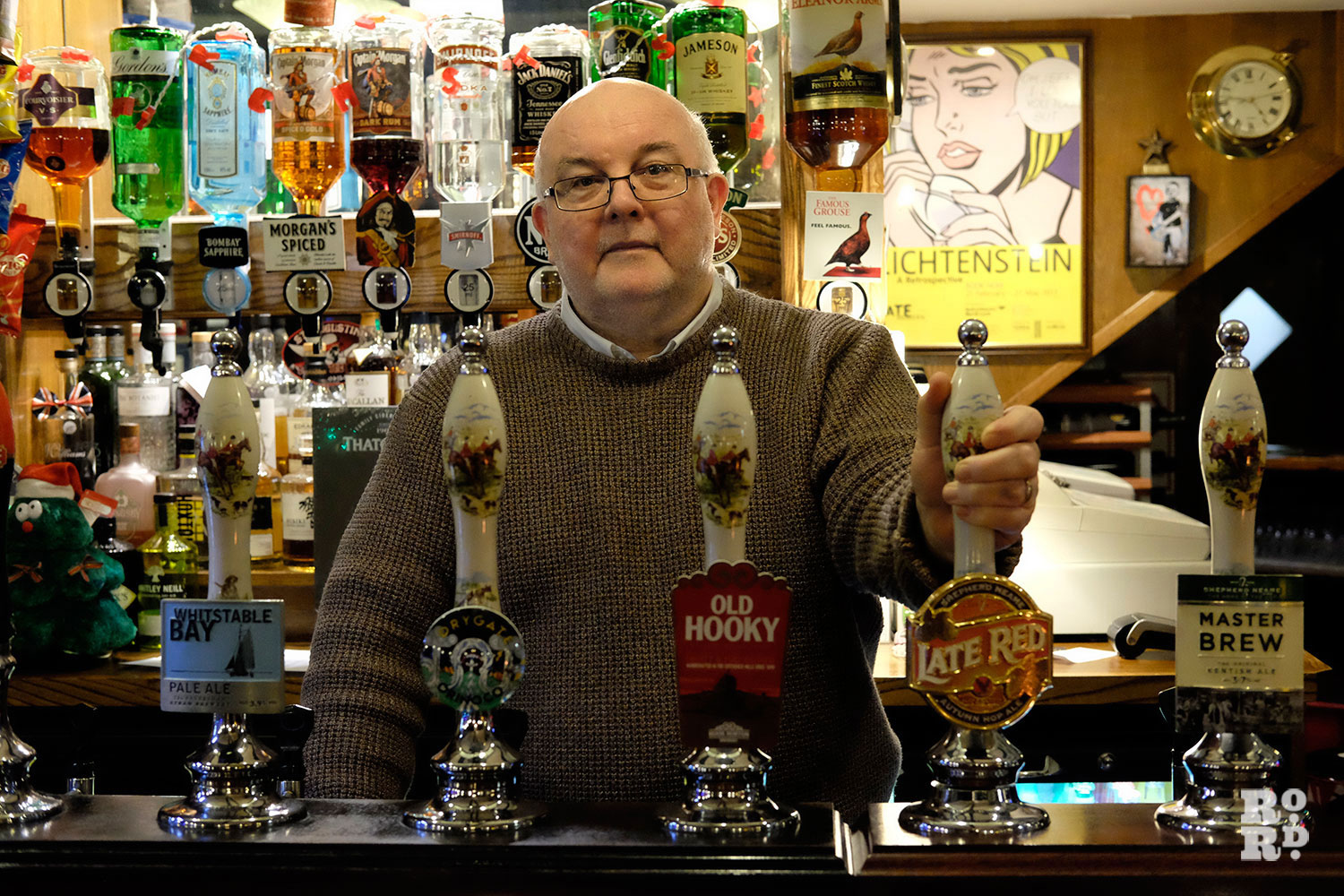 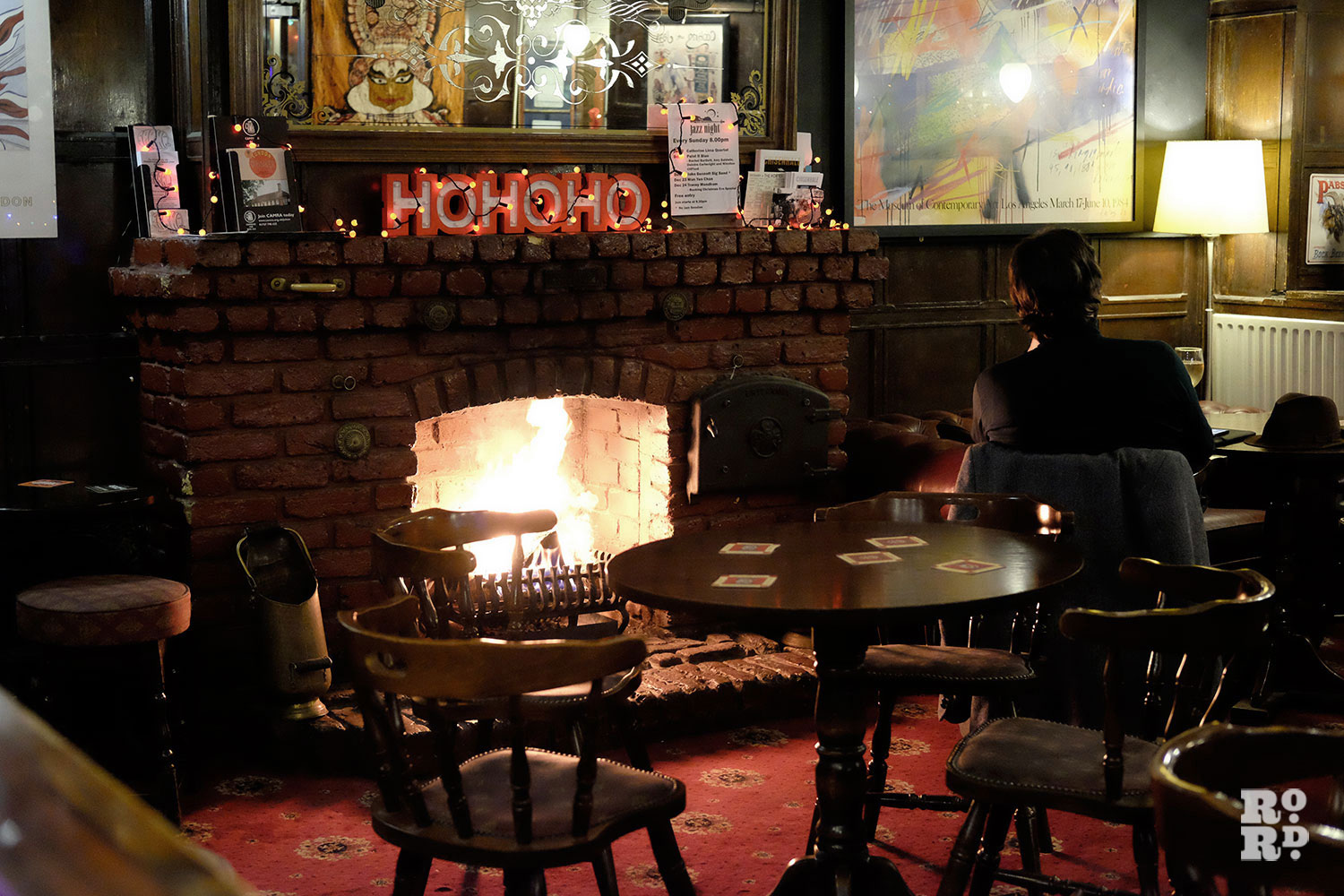 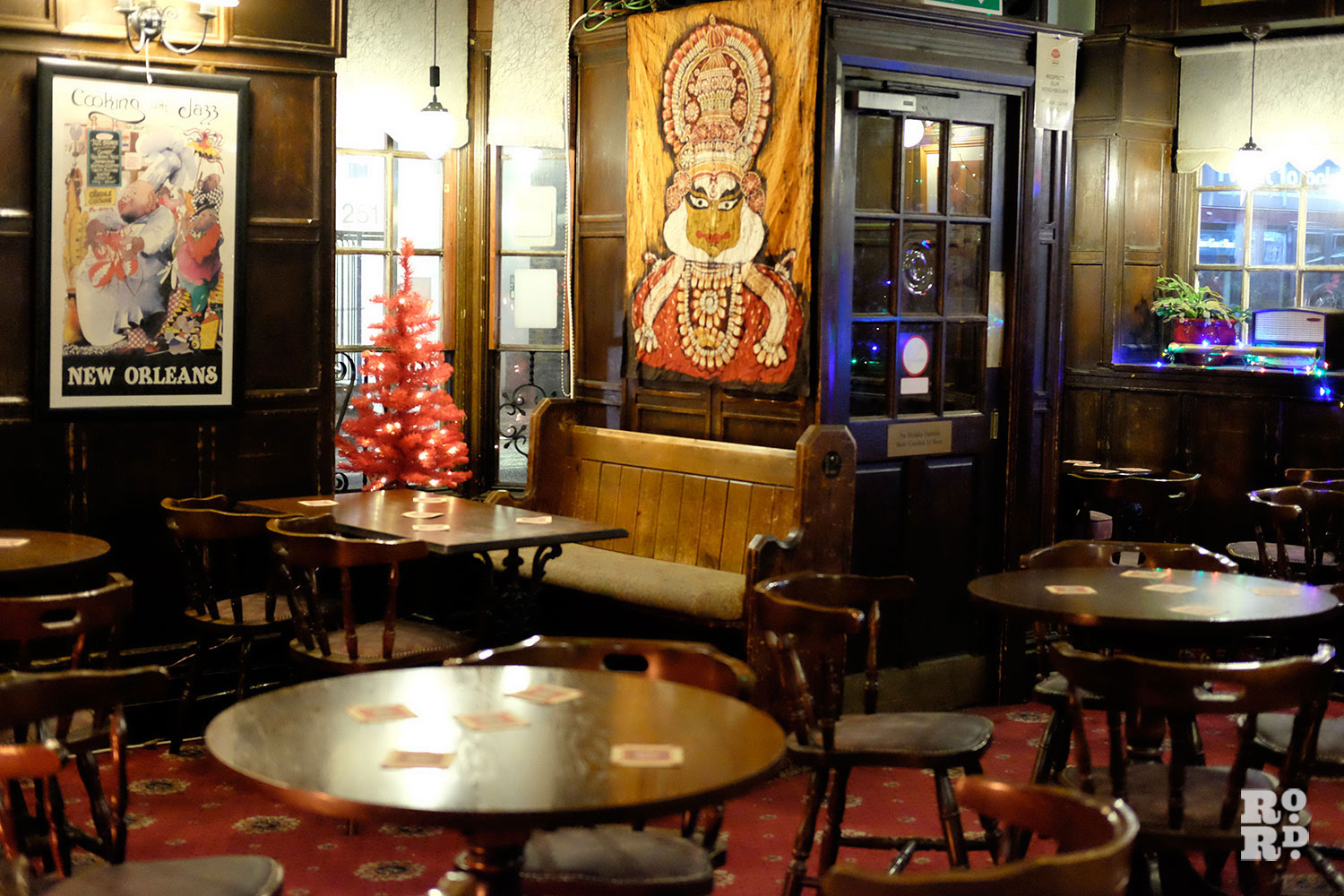 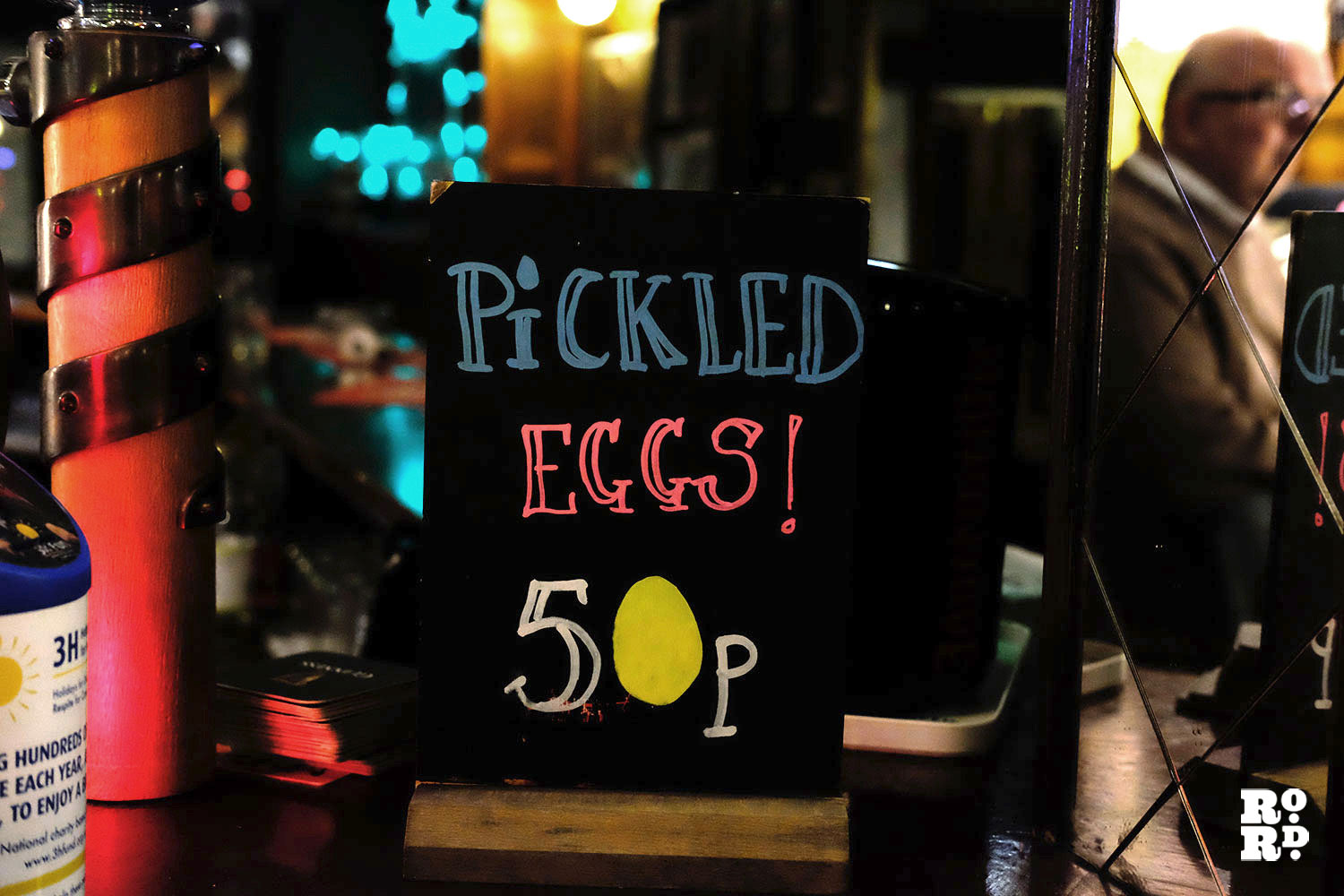 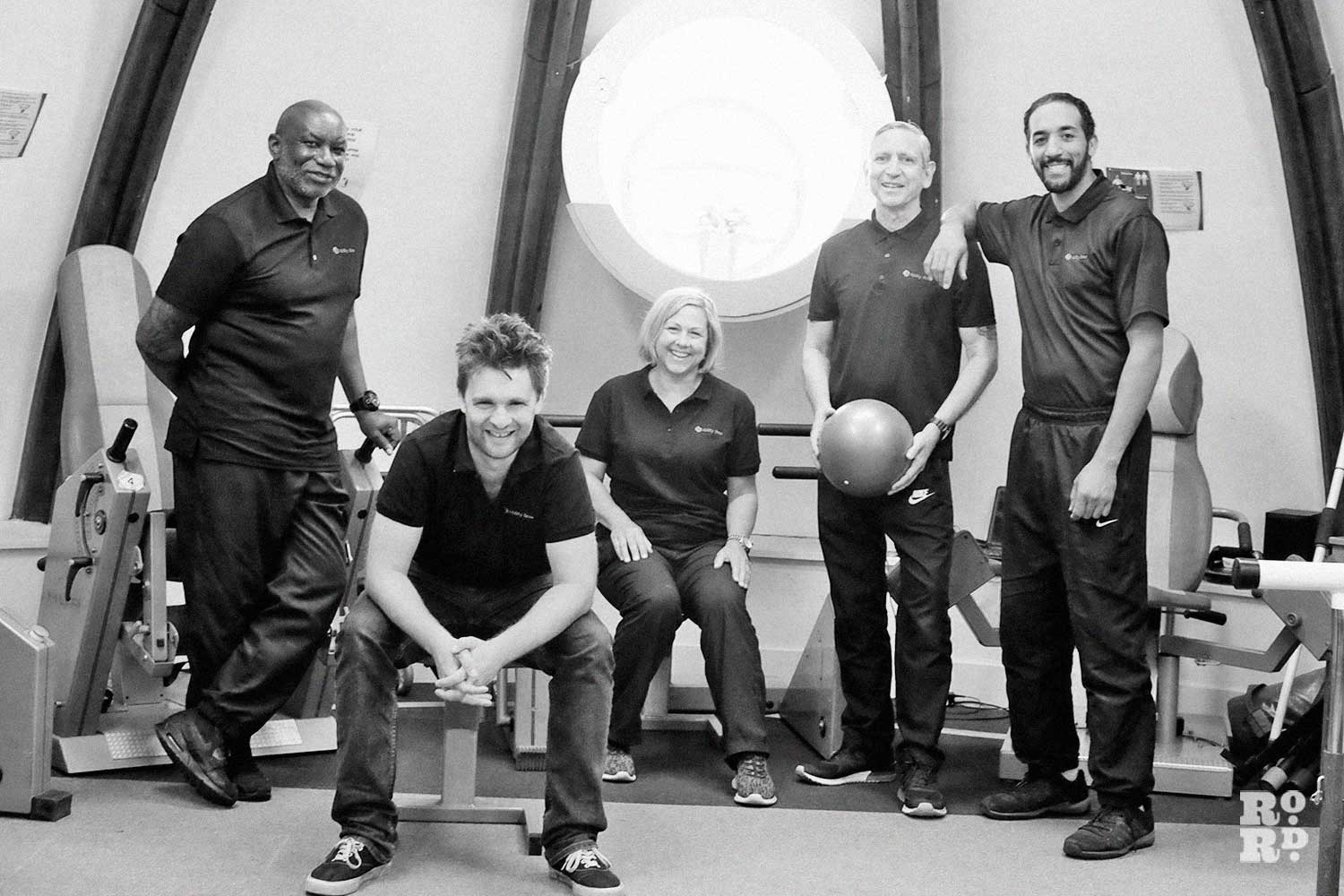 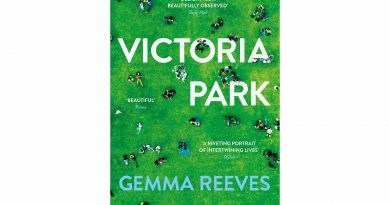 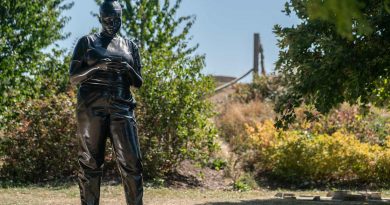