Camilla paid a special visit to Barnardo’s Nursery in Bow on Thursday with a basket of Paddington Bears and other cuddly toys that had been left as tributes to Queen Elizabeth II at royal residences after her death.

Nursery girl and Bow belle, Serena Wickes, was one of the children who received a Paddington Bear, with a royal tag and Camilla’s signature. Serena also presented Camilla with a bouquet of flowers to thank her for her visit.

Serena’s mum, Jinny Wickes, said the nursery tried to get Serena to curtsey to Camilla but that ‘she doens’t always like to follow rules’, and was also ‘a little shy’.

Jinny added: ‘Serena keeps saying, “I met the Queen! I met the Queen!”,’ and that while Jinny said Serena wasn’t quite sure of the significance of the visit, she enjoyed the special day nonetheless.

The nursery, which looks after 55 children, received bears for each of the children. The toys were among more than 1,000 donated to children that Barnardo’s supports. Each Paddington Bear was professionally cleaned and given a label telling the story of its journey.

​​Lynn Perry MBE, CEO of Barnardo’s, said: ‘This is a very special day for Barnardo’s. We know these treasured bears will mean so much to the children who receive them, particularly as they learn about the special journey they have been on.

‘We are incredibly grateful to HM The Queen Consort for her support and kindness. The children here will remember this moment for many years to come.’ 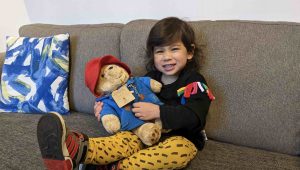