February 2016 saw the first public meeting to discuss the idea of a neighbourhood plan – a plan shaped by the local community rather than the local Council.

After many twists and turns the plan was supported in the October 2022 local referendum. The turnout was low (12.28%) but the majority in favour was over 1,000, and 70% of those who did vote supported the plan. It was adopted at a full Council meeting in November and now carries full weight in decisions over planning applications in the plan area. Thank-you to all who helped in the long plan-making journey!

What can Neighbourhood Plans do? They are confined to dealing with the use and development of land, and can’t in themselves transform a neighbourhood. They can however serve as a tool for the community to shape sustainable development and prevent harmful development. In December the Neighbourhood Forum, the body responsible for the plan, objected to a planning application to change part of the ground floor business of 588 Roman Road into residential accommodation. The Council rejected the application – a small but worthwhile achievement to help ensure the Roman Road remains a predominantly business area.

The Forum’s 5 year life is set by law and ended in 2022. A fresh application for recognition of the Forum by the Council was submitted in the autumn, and the Council’s consultation on the application ended on 12th January. A positive outcome is expected shortly.

The neighbourhood plan includes the designation of 6 local green spaces which will now remain as community amenities and not be built on. It also designates 5 local pubs as heritage assets which weren’t listed buildings, making it harder for these pubs to be converted for other uses.

During 2022 substantial improvements were carried out to the Hertford Union Canal by the Canal and River Trust, including the Old Ford and Gun Maker’s Lane bridges. This helped protect and enhance our precious built heritage.

What next? During 2023 there are a range of development issues. These include:

How can I get involved? The Roman Road Bow Neighbourhood Forum is organising a public meeting to provide an update on the Neighbourhood Plan and Forum, to discuss some of these development issues and to hear your hopes and concerns for the area.

If you live, work or study in Bow you can also join the Forum on our website and vote at Annual General Meetings to elect the committee. 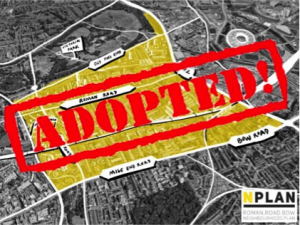