The UK’s first female professional landscape gardener has been given the honour of a blue plaque.

Fanny Wilkinson, a professional landscape gardener and Suffragette, was responsible for designing and building 75 parks across London, including Meath Gardens, in the latter half of the 19th century and into the early 20th century.

A ceremony was held on Tuesday 7 June on Shaftsbury Avenue to showcase the unveiling of a blue plaque in her memory. A tour was held at Meath Gardens the following day to show Wilkinson’s work.

Wilkinson began her groundbreaking career by taking a very unusual step for a woman at the time. She enrolled in an 18-month training course at the Crystal Palace School of Landscape Gardening and Practical Horticulture. At the time, these classes had been intended for men only.

Wilkinson’s great-great niece, Jeanie Northover, attended the ceremony and plaque unveiling. When visiting Meath Gardens, Northover noted the ‘wretchedness of the “living” conditions while the cemetery was still in use’, and ‘the extremely macabre job [her] great, great aunt and her labourers had turning the cemetery into a healthy space.’

Today, the plaque is at her flat on Shaftsbury Ave as a reminder of Wilkinson’s incredible landscape work. 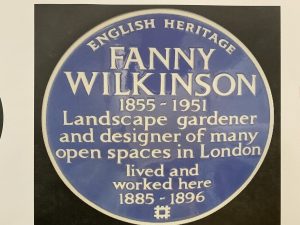