Skip to content
You are here:Home » Campaigning for clean air in Tower Hamlets 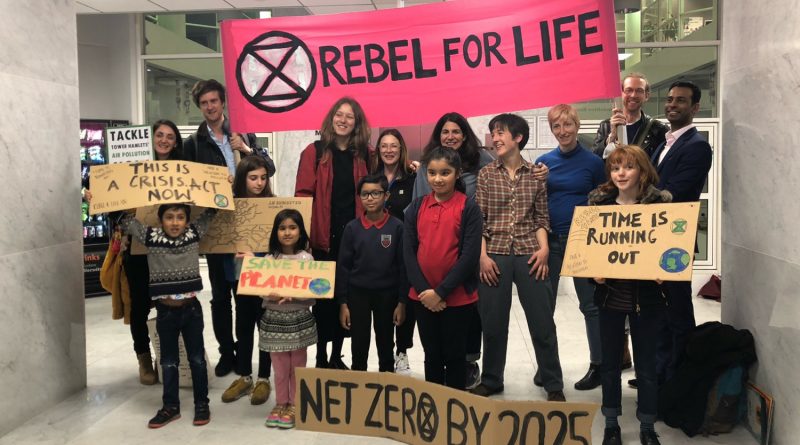 Following a recent survey showing that children’s lungs in the most polluted parts of Tower Hamlets are 10% smaller than expected for their age, Tower Hamlets Council has declared a Climate Emergency. Our environmental correspondent Lizzy Mace looks at we can do here and now in Tower Hamlets to reduce air pollution – the new passive smoking.

Most of us are aware of the dangers of secondhand smoke, or ‘passive’ smoking. We know that children growing up in smoke-free households have less chance of developing asthma, have better lung capacity and general health, and are less likely to take up smoking themselves.

We also know that passive smoking in adults can lead to the same issues as direct inhalation: lung cancer, heart disease, stroke and some cancers of the mouth and throat.

But did you know that air pollution – from traffic exhaust fumes, power generation, low-quality heating, and industry – causes more deaths per year than smoking? And many times more than is caused by passive smoking? So says research published in the European Heart Journal earlier this month, which also estimated deaths from air pollution to be at least double previously thought.

What is the impact of air pollution on health?

Exposure to pollution in children causes at best wheezing, coughs, more common infections such as colds – causing a lower quality of life overall – and at worst can lead to developing pneumonia, asthma, and lung cancer when they are older.

Studies are now showing links between exposure to air pollution in adults and certain forms of dementia developing later in life, as well as lung cancer, heart disease, stroke, and even type 2 diabetes.

Damage can also be caused in the womb from air pollution breathed in by the mother, causing increased risk of premature births and low birth weight.

How does this affect us in Tower Hamlets?

A study by Queen Mary University London, King’s College, and Edinburgh University last year found that children’s lungs in the most polluted parts of Tower Hamlets are 10% smaller than expected for their age, and are on average 5% smaller across the whole borough than expected.

Children are more vulnerable to breathing in polluted air than adults. Their lungs are still developing, and they breathe more air each minute than an adult, due mostly to being more active and spending more time outdoors. Prams and pushchairs also put them at the level of car exhausts.

And not only children are affected – 7.4% of all deaths in Tower Hamlets in people over the age of 30 are caused by air pollution.

Here’s another similarity with passive smoking. Only 37% of households in Tower Hamlets own a car – the second lowest figure by local authority in the whole of the UK, and half the national average.

Most of the traffic using the borough’s roads is estimated to be through-traffic, mostly from the east passing through towards the city centre. Most of us are choosing not to use cars, but are suffering from exposure to other people’s exhaust fumes.

In March 2019, the he council declared a climate emergency, committing to the reduction emissions from the council to net zero by 2025.

This came as the result of a petition which, with 1,100 paper signatures and over 1,000 online, was one of the biggest ever presented to our borough.

Helping to present the petition were two 10-year-olds from a local school who spoke passionately and eloquently about their fears and hopes regarding air pollution and the environment, earning a standing ovation from councillors.

This is fantastic news for the future of our borough, but groups involved in the petition are keen to keep the pressure on to ensure that action takes place appropriate to achieving the goal.

Where is the legislation from central government?

If air pollution really is the new passive smoking, how does the government response to the two issues compare?

Public Health England earlier this month recommended a series of measures to be implemented by councils including no-idling zones outside schools and hospitals, more congestion charges and low emission zones, and schemes to promote the uptake of electric cars.

In October 2018 the UK government announced funding for 33 local councils to improve their air quality. Meanwhile most of the rest of the 326 local authority districts are suffering cuts to their funding, and there is little to no national legislation enforcing the sort of reductions in pollution that we need to see.

As with the plastic pollution issue discussed last month, where the burden of dealing with the problem tends to fall on councils, consumers and activists rather than the manufacturers who produce single-use plastic in the first place, the burden of dealing with air pollution seems to be being placed on local councils, schools and concerned groups, rather than those who produce the pollution.

As we have learned from successfully reducing smoking rates, it takes prolonged, multi-tiered action at a government level to effect change.

Starting with a ban on TV advertising of cigarettes in 1965, and adding a variety of measures over the years including picture warnings on packaging, public awareness campaigns and a gradually expanding series of bans and other disincentives, smoking rates have been reduced from around 50% in the 1970s to 17% today.

To apply this to air pollution, the first step is for the government to tell the truth on the climate. Much as they started to do (some time) after the link between smoking and lung cancer was first demonstrated in 1954.

Our TV screens, magazines and billboards are covered with adverts for cars, showing drivers and passengers having a whale of a time driving through pristine scenery and empty roads.

This is far from the truth of the experience or the effects of car-ownership. If we look back to 1965 and that first step towards reducing smoking, might not banning the TV advertising of petrol, diesel and the vehicles powered by them seem a reasonable, comparable, step?

What about measures to discourage and reduce the production and consumption of cars?

The UK government has announced a ban on the sale of new petrol and diesel cars from 2040 – in 19 years’ time. As the IPCC makes it clear, if we don’t take decisive action well before then, the number of cars on our roads will be the absolute least of our problems.

Far from the sort of central government actions that have enabled a huge reduction in smoking over the last half century, there seems to be a reluctance in current government to interfere in what is perceived as personal choice. Yet when a choice has an impact on people around you, it ceases to be a personal one. This was the case with passive smoking, and it is the case with burning fossil fuels.

One of the most effective tools in reducing cigarette smoking is public awareness campaigns. But where are these for air pollution?

With the government not forthcoming, the Central Office of Public Interest – a community interest company formed by a group of ad executives – aims to fill this gap with a hard-hitting campaign they are currently crowdfunding for, with less than three weeks left:

What’s the biggest barrier to change?

More can certainly be done. Yet there is one major difference between smoking and air pollution. Smoking can be reduced or cut out without impacting the systems we run our lives by – transport, work, energy, education, food.

However all those systems currently rely on the use of fossil fuels, so any bans or taxes relating to their use needs to be provided alongside suitable and just alternatives, as President Macron discovered when his attempt last year to raise taxes on diesel without providing affordable alternatives resulted in prolonged rioting.

If air pollution really is the new passive smoking, any measures to reduce it need to include helping us to move away from our societal addiction to its causes. Indeed, when smoking rates stopped falling in the 90s, the government did just that – funding campaigns and programmes to help people quit – an element that had been missing until then and which kick-started further reductions.

Let us learn from this. It’s taken over half a century to reduce smoking rates from over 50% to 17% – a habit that was not embedded in our entire way of lives. Car ownership is at 75%. And we have much less time to reduce it by the same amount. It’s a far bigger challenge, and to meet it, we need an ambitious programme of measures that contain all three aspects – awareness, disincentives, and support for moving to alternatives – right from the start.

At the same time, in many ways projects to re-route traffic or switch to electric vehicles seem to be just moving the problem around, like trying to tidy a room by moving piles of paper from one corner to another or putting them into a different box.

We need to tackle the reason those piles of paper are entering our houses – the reasons people are taking to the roads – in the first place. We can’t continue living our current high-consumption high-production lifestyles – of which air pollution is just one symptom.

Perhaps a life where fewer journeys need to be made is possible, as well as making those journeys by cleaner forms of transport. We need to transform the very systems by which we live our lives, and we need a government that supports and celebrates those changes. Extinction Rebellion’s demo on 30th March will give more local people than ever the opportunity to imagine together what that alternative might be.

What can you do? 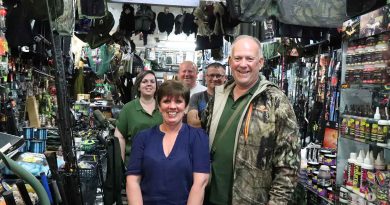 Wishin’ we were fishin’ with Roman Tackle 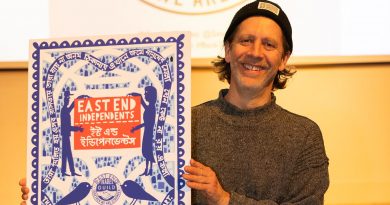 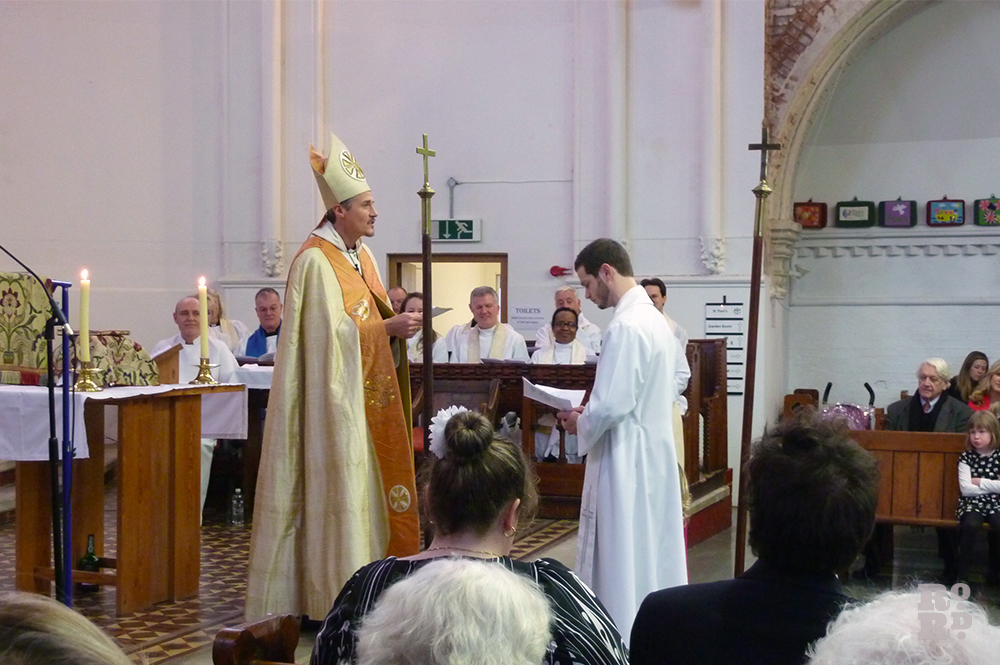 3 thoughts on “Campaigning for clean air in Tower Hamlets”