Skip to content
You are here:Home » Notices » Final hurdle: Will the prestigious TVL 17 League Cup head to Kentish Town or Docklands?
Zahid Rahman

The eagerly anticipated ILFL TVL17 cup final will be played on Thursday 19th of January 2023 under the lights at Mabley Green, kick off at 9pm.

This will conclude what has been an enthralling season of football with respect to both the league and cup competitions, which has captivated the audience. Time and again we have been privileged and honoured to watch a high calibre of football on show that has on many occasions reached fever pitch!

Kentish Town Vets from the ILFL TVL 1st division take on Docklands vets from the 2nd division, in what will be an inaugural final for both teams. There is a huge amount of excitement and anticipation for this final, partly because of the relative league standings of the teams and secondly and most importantly because of the journey they have had to get to this stage.

It is fair to say, it has not been an easy run for either team, they have played some tough fixtures against big names to achieve this feat, and this is testament to the resilience and solidarity they have both shown as teams. Kentish Town started their cup campaign with a 3-1, relatively comfortable preliminary round win against Poplar Vets, and Docklands played Premier division outfit Golden moon in which they were victorious 2-0, a great start.

Both teams were then drawn in the same group to face each other alongside Shoreditch Vets A, the current premier division champions as well as Hawk and Eagle an established first division side. Docklands won the group having not conceded a single goal, which in itself is a display of defensive solidity and good tactical execution. Kentish Town finished runner up.

Both teams then had difficult quarter and semi- final games which they managed to navigate through, and now have proudly earned the right to participate in a final.

These two teams are evenly balanced on paper, and it’s a game which is finely poised, the outcome of which may be decided on very small margins. Docklands have beaten Kentish Town in the group stages, but this game will all together be a different affair.

In the ‘Inverting the Pyramid’ Jonathan Wilson writes, which I will paraphrase- ‘a game of football is like a complex tapestry, there are so many intertwined factors that will affect its outcome; motivation, fitness, ability, and tactics amongst other…’ the best team on the night will succeed!

Thursday night will see one new team enter in the history books, a new name on the cup trophy, a team who will earn the bragging rights for a season. No matter what the outcome is, both these teams deserve incredible plaudits for their success thus far. Wishing both teams all the best and looking forward to an exciting final!

“Keeping the unity in the CommUnity” 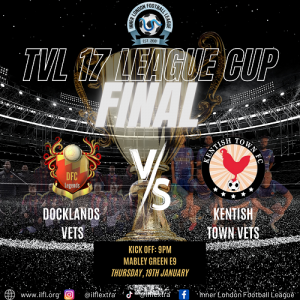