Skip to content
You are here:Home » Mae + Harvey – cool kid on the block 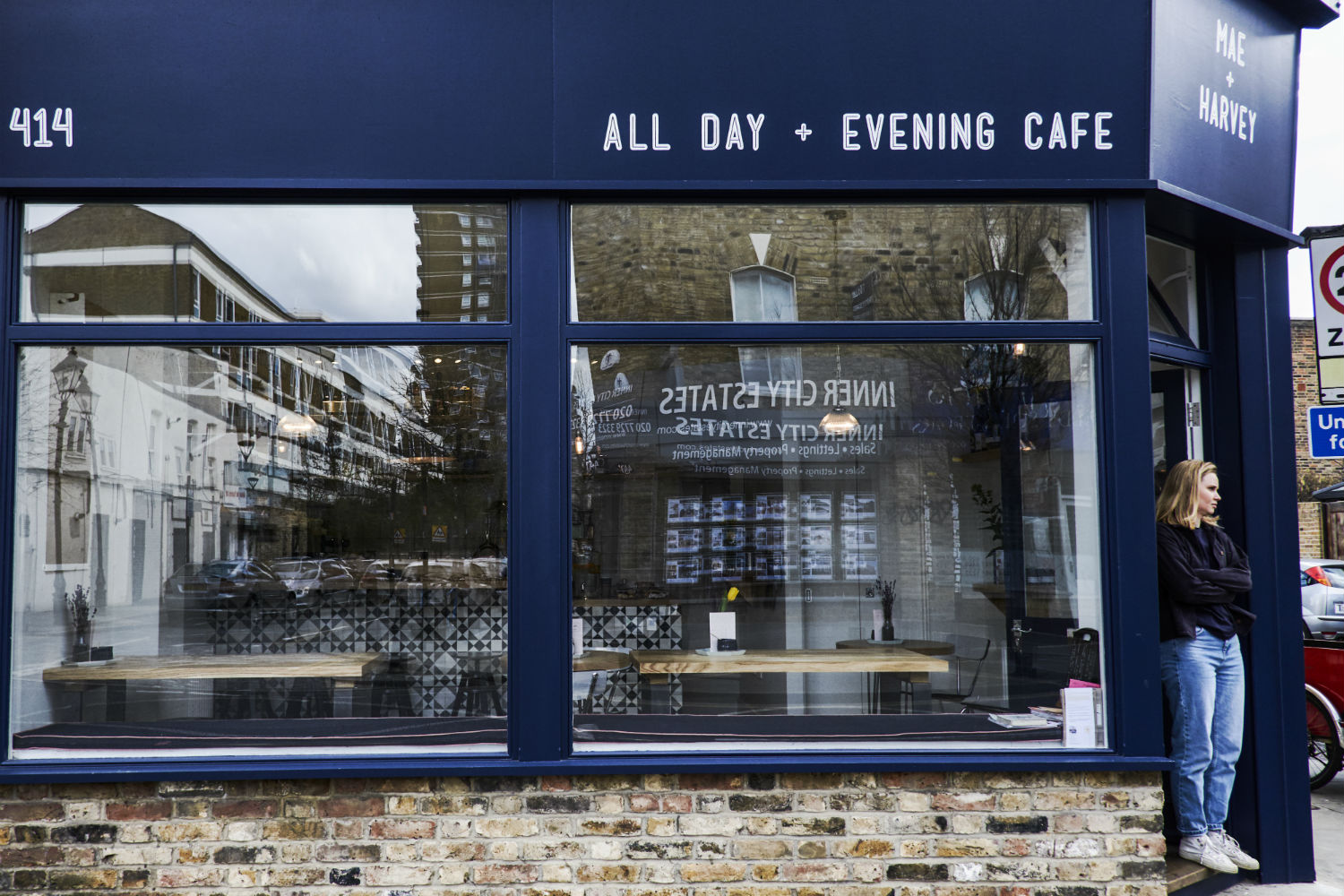 At first glance Mae + Harvey, with its dark blue exterior walls and a hipstery font, can easily fall into the trendy wave of East London’s foodie hotspots. A place where cereal is served in avocado skin and traces of cow’s milk are hard to find. Yes, avocado on toast is a part of the menu and the dishes always come out Insta-ready, but hip is the last thing this place is trying to be.

It all started with juices

Considering the following Mae + Harvey has, it’s surprising to learn Natasha Sayliss doesn’t come from a catering background. However, the passion and experience she has collected over the years make her the perfect person to run her own café. And she is only 27.

‘I grew up in a family when we always discussed what our next meal is going to be,’ Natasha says. ‘Everything centres about food and because my mum is a great cook I’ve always had passion for home-made meals that are made with love.’

Natasha’s foodie journey kicked off when she started attending Wimbledon College of Art, studying fine arts and dedicating her time to painting. That’s when she began working at Borough Market on the weekends, helping at different food stalls to make some extra cash.

Playing with a cold press juicer, Natasha began making fruit and veggie raw juices at home. The owners at her local green grocer in Wanstead knew her as she grew up, and they often put aside fruit and veg that was too ripe or ugly to be sold for Natasha to take home. Drawing upon her experience as a market trader, she started supplying small indie shops with her healthy elixirs.

One of the first coffee shops that agreed to sell the Mae + Harvey juices was Store Street Coffee off Tottenham Court Road. At this point, her business got a new spin. A book publisher who was a regular in the shop fell in love with Natasha’s juices and offered her the opportunity to write a recipe book. Natasha thus shared her knowledge of cold-pressing in No Ordinary Juice Book. Writing a book in your twenties could easily pump up one’s ego, but Natasha kept her feet on the ground.

Friends from Natasha’s market days opened a coffee shop in Holborn and she began working in their kitchen, putting her love for food and art into practice, learning to create beautiful latte designs and café classics. The arrival of a new commercial juicer helped her business bloom and she soon decided to branch out into something different.

‘Ever since I was a teenager I wanted to own a coffee shop,’ says Natasha, her blue eyes lighting up.

Her first brush with East London came when she stopped by Fika, a Swedish bar and café and offered her juices there, without luck. Years later, while she was browsing spaces on Gumtree, she came across the same café that had once rejected her juices. The owner wanted a quick sell as Fika was moving to Brick Lane and Natasha decided to buy it.

The name came quickly after that. Mae is Natasha’s middle name, which has been passed down from her mum and nan. Harvey is the name of the greengrocer in Wanstead where Natasha used to get her fruit and veg from.

Although the original juices have left the shop floor as running a café is a full time job, Natasha found a great supplier. She even asked them to create her staple juice flavour exclusively for her – carrot, orange, and ginger.

Apart from the usual coffee list, the menu now spans cheese-toasties, buttermilk pancakes, and sarnies to Taco Tuesdays and Bloody Marys. Their staple chicken sandwich has become a crowd favourite, along with the pancakes with fig jam and berry compote.

‘Every café on Roman Road is a bit different and I’m happy that we’ve created staple dishes that will stay on the menu forever,’ adds Natasha.

As you walk into the café your eyes are drawn to the bar, where all the magic happens – from cooking and serving food to shaking cocktails and grounding coffee. Its wall is tiled with geometric azulejos tiles – adding a warm Portugese touch to the space.

Five wooden tables are carefully positioned around the floor, with two long desk-type tables and comfy benches pressed against the large windows. The space is tiny – everyone can see you and you can see everything, yet being exposed doesn’t feel at all uncomfortable.

The coffee is served in beautiful hand-made ceramic pots glazed in blue and turquoise that match the colours of the shop. The plates are similar works of art. They have all been made by Natasha’s friend Anna (of Kana London Ceramics) who she met on Netil Market during her juice-making days.

The café looks like something copy-pasted from an indie design mag, but there is nothing pretentious about the design at Mae + Harvey. Natasha simply chooses things she likes and her creativity helps to piece it together. The shop reflects her personality, and despite her artistic background she likes the café being stripped back. ‘We’ve taken a lot of pride in being clean and simple.’

The priority is to buy good quality products that are carefully and often locally sourced, helping small designers and artists to get noticed. Despite not being a Roman Roadie, Natasha has developed strong relationships with local people and shop owners.

Abbott’s has done Natasha’s flooring, and Angela from Baruch made the beautiful cushion covers that are stacked in the corners by the window, adding a homey comfort vibe to the shop.

Natasha is always on the lookout for products from independent makers that she can promote and sell. The wooden shelves, made by Joseph Carpenter, are stacked with jars of peanut butter, honey, and craft beers. Pickle mix used for Bloody Marys is an invention of Florence of Pickle House and jams are hand-made by Newton and Pott. Granola and muesli has been picked from The Bread Station – a Hackney bakery that supplies the café with sourdough bread.

‘I want to work with people and suppliers who are both independent but have a presence and I think that helps to make the café successful,’ she says.

A magazine rack compliments the homey vibe and hangs from the wall offering coffee-drinkers a distraction from their phones and laptops. And the daily menu? Written with black marker on a roll of brown paper hanging from the wall.

People on the weekend make a journey to visit Mae + Harvey or stumble upon it when strolling through the neighbourhood. While freelancers and fellow shop owners are the café’s regulars on weekdays, on the weekend people are more likely to experiment with their meals.

With beautifully decorated dishes that compliment the interior, It’s no surprise that Mae + Harvey has become centre stage of many people’s Insta feeds and stories. And while Instagram is important to Natasha for making relationships and engaging with her customers, she believes it’s not what brings people in.

‘I think people appreciate how much effort we put into making our food. We make everything from scratch,’ says Natasha.

Recipe ideas and dishes are suggested by Natasha’s colleagues, friends, and customers, but most of the time they just pop up in her mind. The important part is that the groceries are carefully sourced and the menu changes according to the season.

The wines – one red and one white – come from Vinarius, meat is carefully picked by Gavin from Peckover Butchers, and fresh flowers from Denningtons have become an unmissable part of the café. Salmon is delivered fresh from Hackney and the Best Food Centre is the first pit stop for avocados.

Everything is made fresh in the morning, including pancake and waffle mix as well as soups and dressings. To avoid wasting food, Mae + Harvey is part of Too Good To Go, an app where cafés offer their dishes for a reduced price before closing, instead of throwing them out.

Natasha’s secret to success is using classic recipes and adding her own twist, as well as knowing what ingredients go together. And if that doesn’t work?  ‘Just wing it.’

As cool and Insta-friendly as the café is, making tasty, home-made food is what Natasha lives by. And although she does put her creativity into practice in both designing the shop and staging the dishes, she isn’t trying to be anything other than a good local café.

‘It makes my day to have a great meal so it’s an even better feeling to be able to make other people feel good,’ she says.

The world at their door

When asked about what the future holds, Natasha is sceptical. ‘I don’t like change and I never never ever want to leave this spot,’ she says, but reveals that an idea of owning place with more tables or even a friendly-local restaurant has crossed her mind.

For now, Natasha plans to do a set dinner menu every other Saturday with more delicious meals and cocktails to keep the café fresh and herself occupied.

Community is planted deep in Mae + Harvey and that’s what Natasha loves about Roman Road the most. ‘Roman Road has a sense of community that a lot of areas of London have lost,’ she says. Her business doesn’t allow her to venture further than Cafe East, but on some days she can be found having a drink at the East London Liquor Company in Bow Wharf.

‘I like that everyone walks through the door and you see different cultures and religions,’ she says when asked about the diverse demographics of the area. ‘Roman Road has got it all.’

Roman Road really does have it all, not least Mae + Harvey. We hope this cosy little cafe will never leave our ends and it will keep on enriching the local community till the end of time.

For more on Mae + Harvey, check out their recipe for a healthy breakfast, or Christmas dinner. 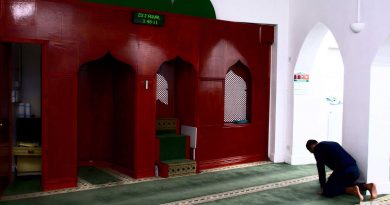 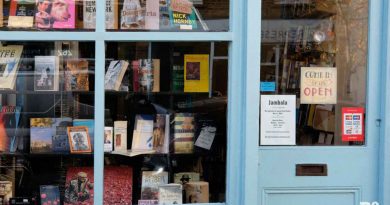 One thought on “Mae + Harvey – cool kid on the block”