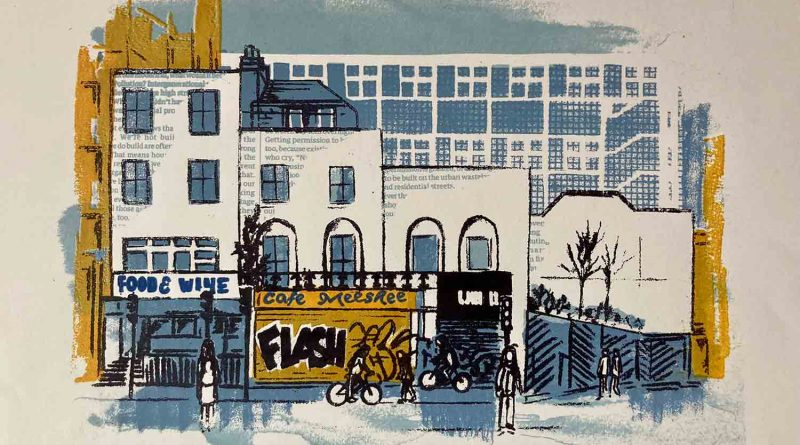 Most people walking down Mile End Road probably don’t envisage a piece of art when they pass the local offy and East End caff found on the junction. They probably don’t even look up at all. But for printmaker Ali Smith, these everyday urban scenes are where she finds her artistic inspiration.

Graffiti, bridges, canal boats and cranes are the subjects of many of Smith’s prints, who takes in the local urban area by walking Monty, her Irish terrier, through the streets of Bow and along the towpaths of the Regent’s and Hertford Union canals.

‘They might not be what other people consider amazing landmarks, but I tend to like urban structures and buildings more than trees and things. The canals are great to capture because they are a mix of nature and the people who live on them,’ says Smith.

But it’s clear that the area means more to Smith than just providing inspiration for her work. Talking to her in Zealand Cafe – with Monty nuzzling at our legs under the table – it is evident how fond and knowledgeable she is of the local area, having moved here to do her nursing training in 1987.

On Kenilworth Road where Smith now lives just off the Roman, the sense of community that sprung up during the pandemic has long outlasted lockdown with residents still holding daily coffee mornings and weekly evening drinks in the street.

Smith said: ‘People say London is lonely but I don’t think that’s true. There are pockets of East London like this one that have the community feel of a small village.’

Smith gave up nursing 24 years ago to be a mum and a carer to her two children who both have long term medical conditions. During Covid the family were shielding so a lot of Smith’s artwork focussed on Monty and her son and daughter, but now she is out and about in the local area again.

On one dog walk passing Queen Mary’s University on the canal path, Smith said her attention was caught by the colour combination of the blue boats complementing the buildings in the background. But rather than pitching up an easel and capturing it there and then, printmaking is a rather more arduous process.

Screen prints like this one are made by spreading ink over a stencil made of mesh screen to imprint a design on the surface below. The design becomes more intricate as layers are added, with a print that Smith is currently working on involving 17 layers and several months’ work.

‘It’s like painting in slow motion,’ she explains: ‘Prints can be made on mass which is why I like doing them, but it’s not like you’ve just taken a photo of a painting. They are made using the same process but lots of people don’t understand that each one is a unique original piece.’

‘There’s something about the process of doing it that is quite mindful … although it can also be rather frustrating,’ she laughs.

Smith said that during lockdown her kitchen was transformed into something of an art studio, but she does much of her work at the Idea Store print studio in Shadwell which offers printing courses including screen printing, lino cutting and etching to name a few. It was here that Smith attended a course eight years ago which reignited her love of art and introduced her to the patient world of printing.

‘I came from an arty family and did art at A-Level, but I don’t think I had the confidence at the time to pursue art as a career. Looking back now I wish I had,’ says Smith.

Now that her children are both of university age – with her daughter inheriting the arty genes and also studying printmaking – Smith says she finally has time to focus on herself.

Taking on a new job as an NHS peer leader last year, printmaking is still a part-time endeavour for Smith, though she hopes to set up a website and start selling more prints in the new year, and has an exhibition planned at the Yurt Cafe in Limehouse later on in 2023.

‘As a mum it’s always been about my children but as they’re growing up I have more time to rethink,’ she muses: ‘This year is my year of change, and I am just beginning to focus on myself.’

If you enjoyed this piece, read our article about local artist Mira Connolly. 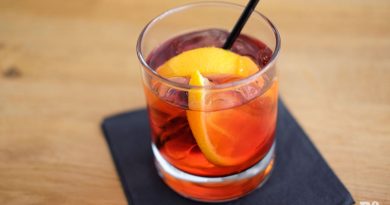